Sake is made using 4 ingredients. Rice, water, yeast, and koji (Asperdillus Oryzae). As there are only 4 ingredients in sake, they each play an integral role in the complex process of brewing sake. This is a guide for the general stages of brewing, along with some important Japanese classifications.

After harvesting and drying the rice, the outer husk of the brown rice is removed.

As sake is predominantly made with white rice, the brown rice is polished to remove the outer grain. The percentage that the rice is milled along with the type of rice used, is one of the factors of the style, aroma, and flavour of the finished sake. A sake made with rice that is only lightly milled, say 80% (with 20% of the outer grain polished away) will tend to have a more robust aroma and flavour than a sake made with heavily polished rice. This is largely due to the fact that a rice grain contains most of the fats, oils, minerals, and proteins in the outside of the grain. The toji may choose to use a highly polished rice to remove unwanted fats, oils, minerals, and proteins from the rice to produce a sake that is more delicate and refined in aroma as well as flavour.

During many stages of the sake brewing process, a huge quantity of water is used, from washing, soaking, and steaming the rice to adding water for the ferment, and sometimes adding water to dilute the alcohol level in the finished sake. The various minerals in water is one of the key elements as to whether it is considered desirable for sake brewing as some can aid in the fermentation process.

Water can be described as ‘soft’ or ’hard’ depending on the level of minerals it contains. Water that is low in minerals is considered soft and creates a slower ferment where the yeast doesn’t have to work as hard, resulting in a sake that is softer and sweeter on the palate. Water with a higher mineral content creates a faster ferment which means that the yeast needs to be stronger, resulting in a sake that is more robust and often times, drier on the palate. 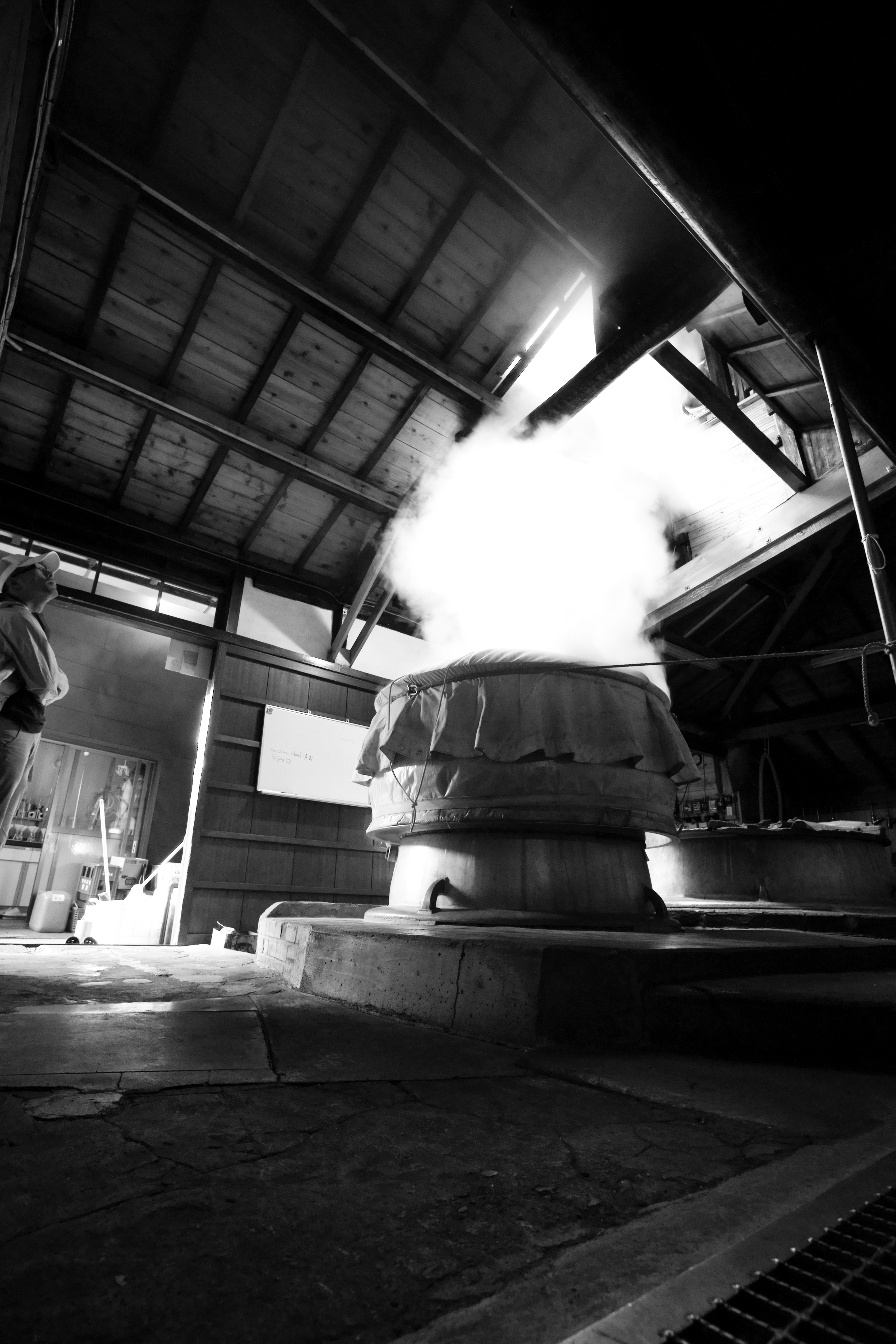 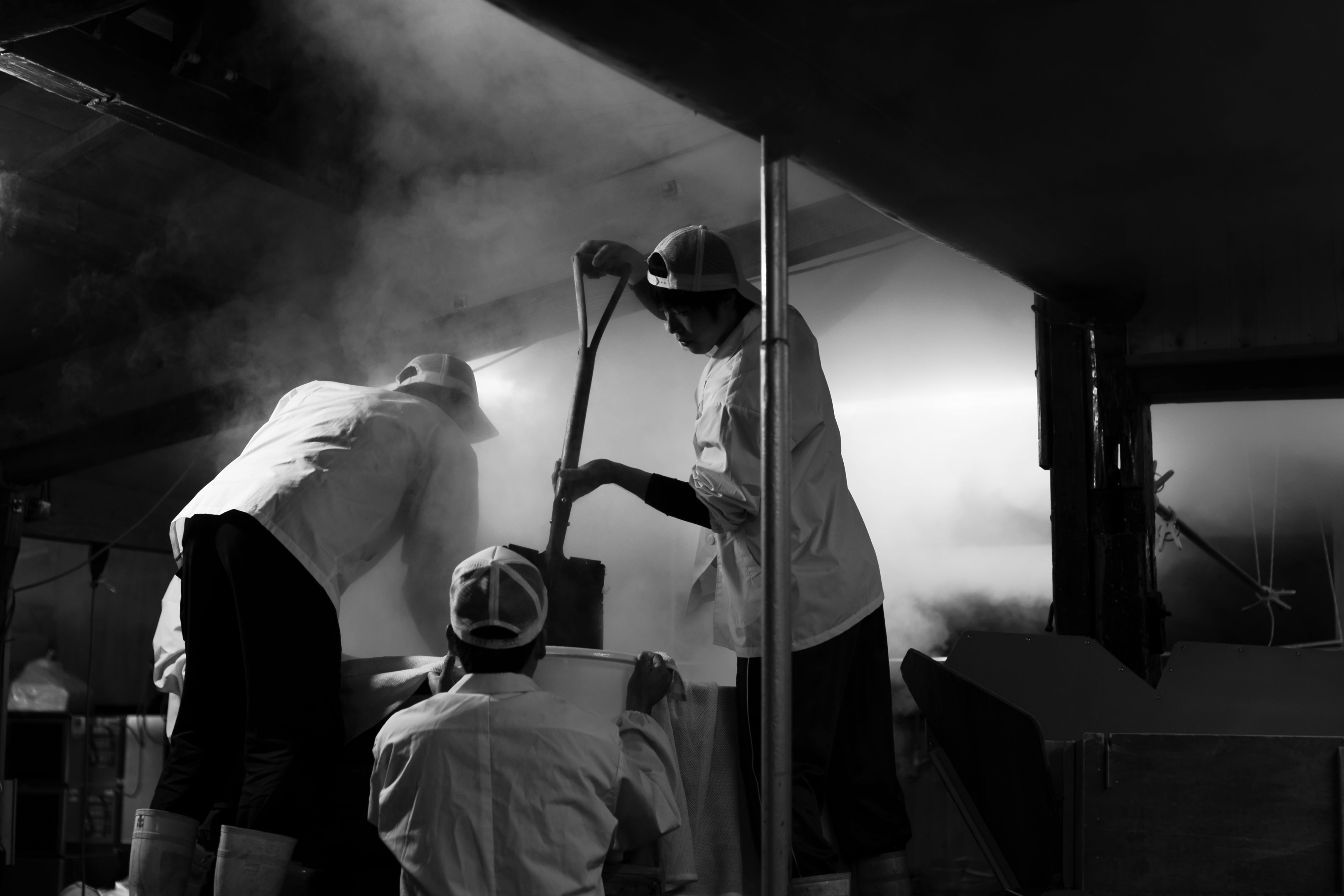 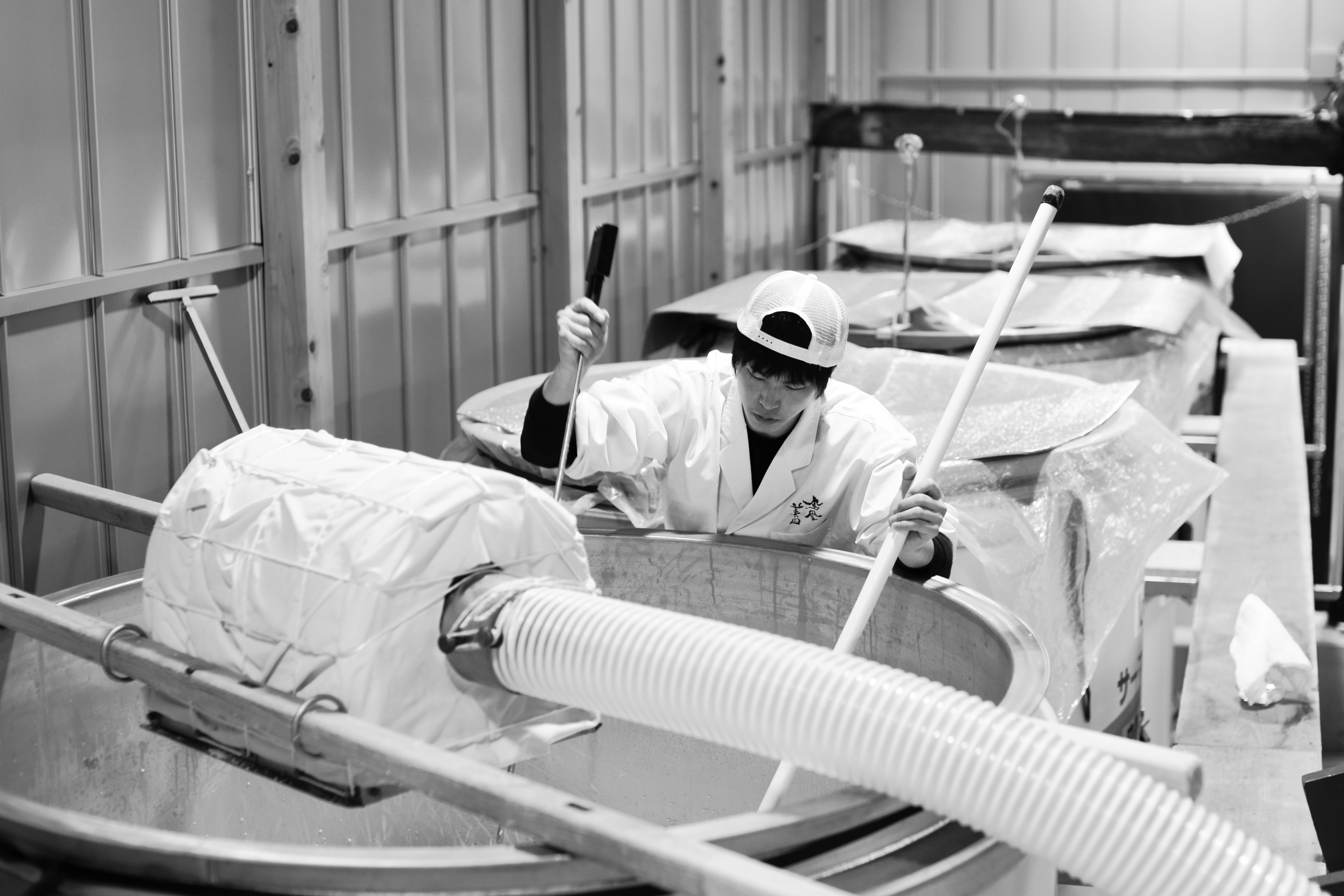 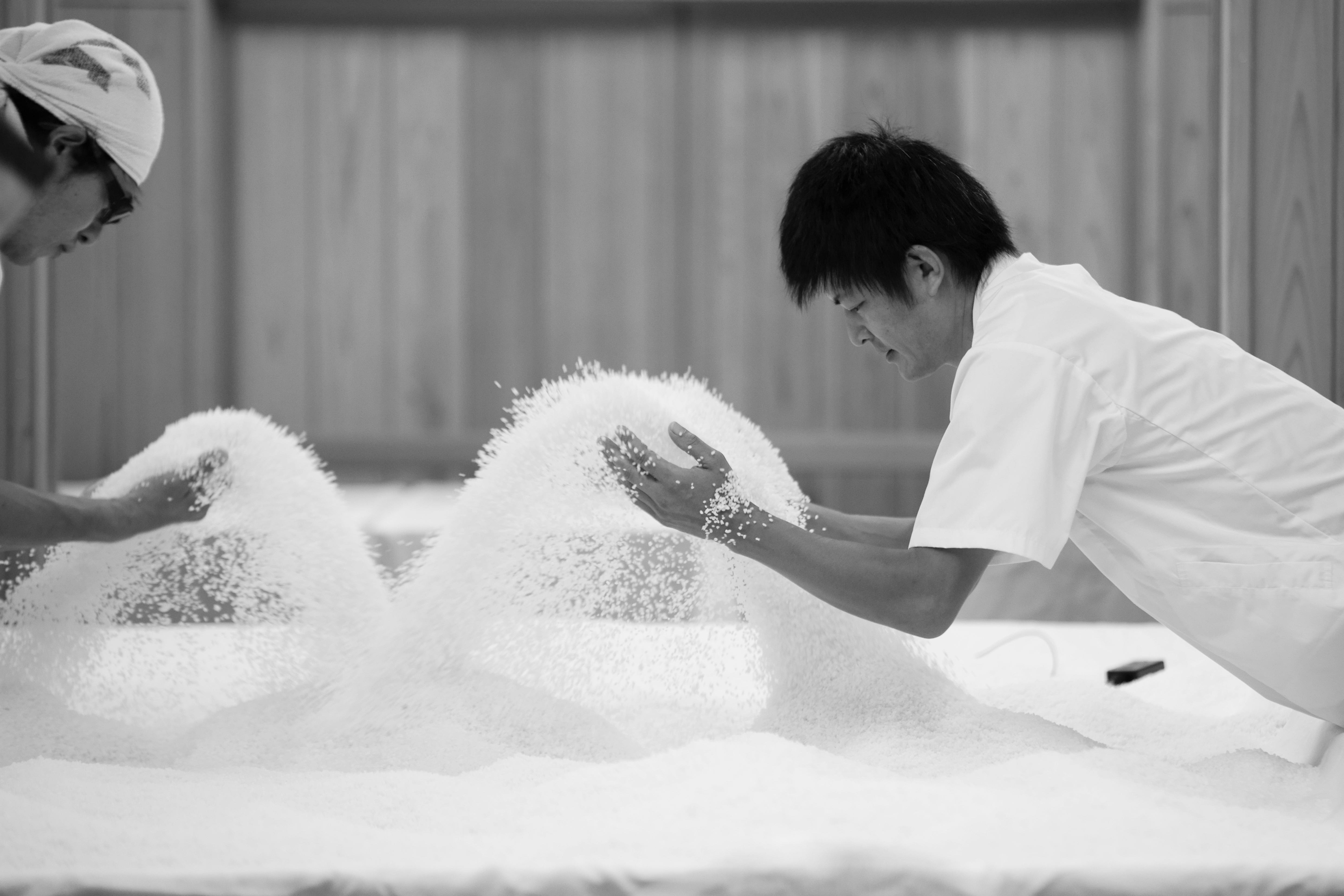 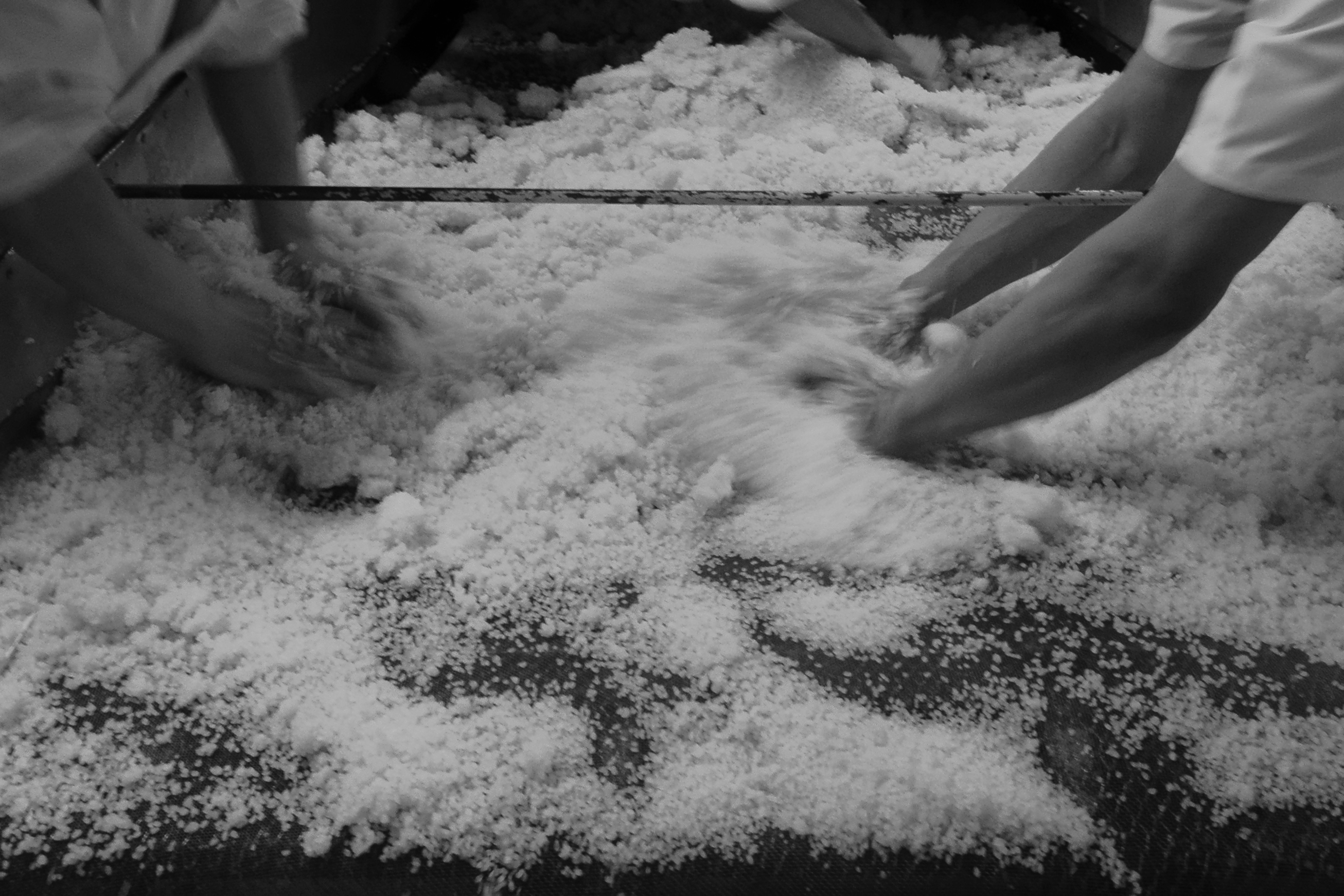 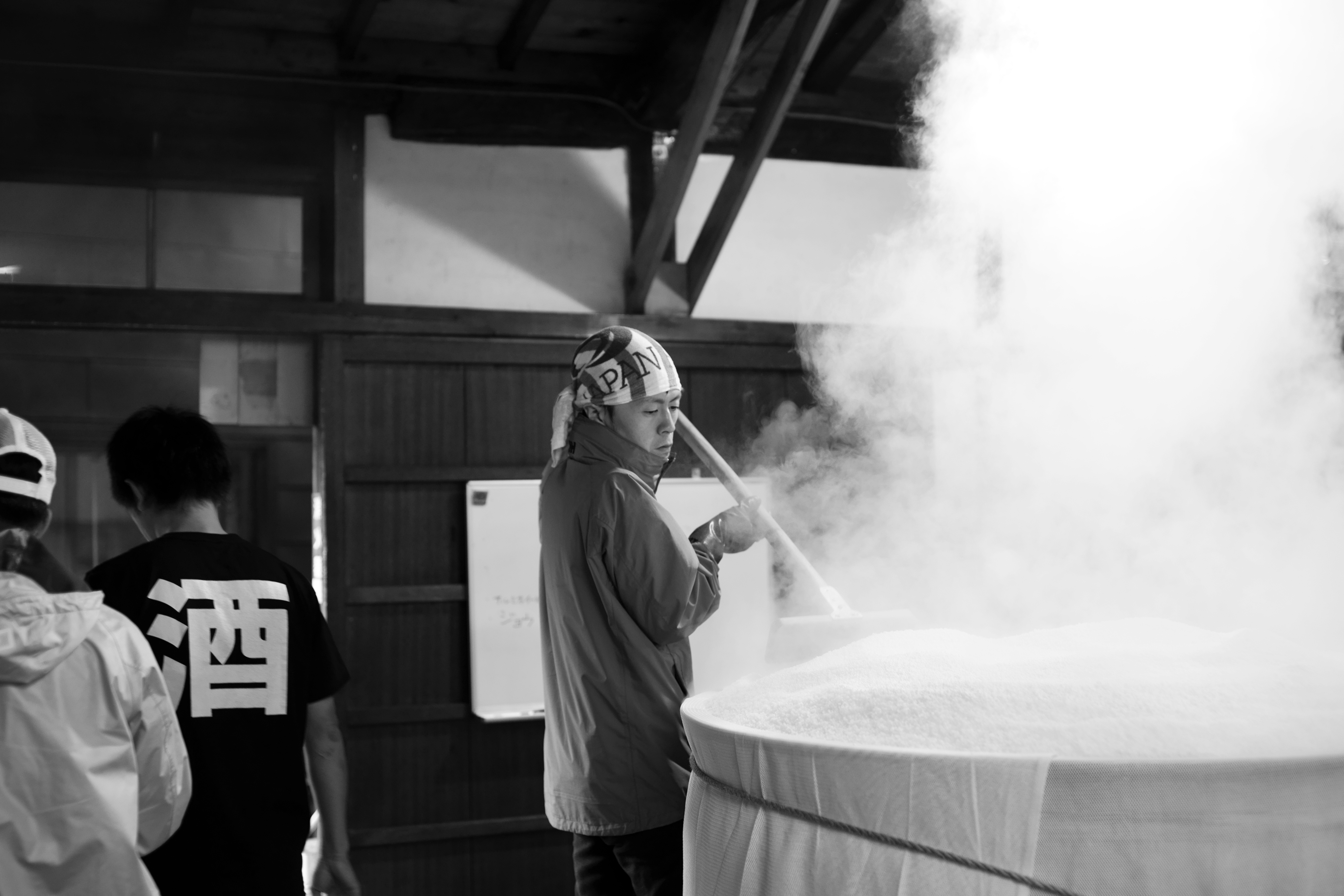 The polished rice is washed, soaked, and cooked with steam.

The steamed rice is taken to a “clean room” in the brewery called a koji room. It’s a room kept at very hot and humid conditions, much like a sauna. The steamed rice is then laid out on a table and sprinkled with koji spores, which is the mould that breaks the starch in the rice down into sugar. The koji spores are then mixed into the rice and placed in containers and left in the koji room for 2-3 days to allow the conversion of starch into sugar.

Yeast is the organism that creates fermentation by converting sugar into alcohol. There are several different strains being used for sake brewing, with new varieties being discovered and ancient varieties being rediscovered. The yeast that the topi selects for the sake will influence everything from the fragrance of the sake to its flavour and acidity. Most tojis use cultivated yeast but many of our artisanal Kura still use wild yeast that naturally grows in their breweries. The tank where the yeast starter begins is known as the moto or shut and is designed to let the yeast multiply and start fermenting before adding it to steamed rice, koji, and water in a larger tank to make the moromi (main ferment).

If the traditional method of grinding the moto together with the wooden paddles, the sake created will be known as Kimoto sake. If they skip this mashing step and continue to make the main ferment, the sake will be known as Yamahai sake. If the toji adds lactic acid to the moto before creating the mash, the sake style will be known as Sokujo, which is the most common method used in brewing sake today as it’s easier and faster. Sake made with both the Yamahai or Kimoto method, tend to be more robust, often with more earthier and traditional flavours than a Sokujo sake which tends to be a cleaner flavour. When making the moromi, the toji continues to add 3 more additions of steamed rice, koji, and water over four days in the main ferment tank until it reaches the desired quantity before letting the mash sit to ferment (2 weeks for the Sokujo method and 1 month for the Kimoto and Yamahai method) . During this time, the ingredients go through a multiple parallel fermentation, where the conversion of starch in the rice grain into sugar and the conversion of sugar into alcohol takes place at the same time. The result is an undiluted sake with an alcohol content of around 18-20% (higher than any other naturally fermented beverage).

After the fermentation is finished, the liquid is then separated from the solids. Many artisan or craft breweries still use the traditional methods, where the moromi is places in cloth bags and hung to allow the liquid to naturally drip out of the bags (known as shizuku or droplet sake), or they can be placed in a traditional press where the weight of the bags on top of each other gently presses out the liquid (known as arabashiri or free run sake), or it will be gently pressed with either a metal press or by adding weight on a wooden beam press. The most common method done today is with a large automated press called an ‘assakuki’.

After pressing, the sake is usually filtered again. Some breweries use active charcoal powder in order to strip out undesirable flavour, colour, or particles.